In MX today - Running from Madonna

When it comes to diet and fitness, it seems that people don’t think the oldies are the goodies.

It’s weird. If I announce I am following the latest celebrity diet, everyone is interested. After all, how what can go wrong when you follow the advice of people who believe in size zero and Scientology?

But when I mention I’ve taken up running people respond with horror. It won’t work, they tell me. Jogging is too hard. It’s bad for my joints, they wail.

I’m doing the Couch to 5k, a beginner-friendly plan designed to get you to running 5 kilometers without tears, injuries or requiring illegal steroid injections twice a week from someone called Big Boxing Bob.

I can see the results and I’m enjoying it. But people insist on worrying about my knees. Won’t someone please think of my knees?

From the stories I have heard, a small but significant proportion of the population has explosives in their patella. Much like the bus in Speed, they’re fine at a walk.  But if they ever try to go faster, disaster! Their kneecap detonates, shattering a nearby bus, Sandra Bullock’s career and any idea they might have had that Keanu Reeves can act.

Running is prehistoric; a sure fire way to exploding knees and injuries, people tell me. Have I considered the more suitable modern alternatives?

I’ve tried yoga. In the slow version I fell asleep, in the fast one I got my bits stuck in my other bits and needed to be unknotted.

Pilates is great but doesn’t burn off many calories. Rock-climbing is fun but I spend less time climbing lithely like a snow leopard and more time swinging from the harness like a cat being rescued from a tree.

I need to do something cheap and cheerful that burns off the calories. So, why can’t I just jog to get my aerobics the old fashioned way and run?

But no, people tell me I need to go more high-tech. Jogging? Outdoors? With just trainers? Where is the modernity, where is the equipment? Where is the studio with integrated FitBeat™ music blaring and a Madonna-skinny instructor shouting abuse?

People always recommend some sort of class. They’re usually called Bootcamp or DethSpin or GroinPump or something equally macho.

Or you can pirouette insanely around with weights such as kettlebells (which looks neither like a kettle or a bell, but does look like some the Spanish Inquisition would use) while a terrifyingly fit woman in her 50’s screams insults at you – again, until you want to throw up.

Look, if I wanted to be verbally abused about my weight and fitness, I could just visit my mother. At least she doesn’t wear crotch-exposing clothing, (is it just me, or does Madonna’s bits in a leotard look like an uncooked chicken?) and she also does a nice dinner.

She’ll cook the dinner, I’ll eat the dinner and then – when she starts on my weight, waistline and how I could be such a pretty girl if I’d just look after myself – I’ll stick on my trainers and jog gently into the distance.

A healthy meal, a catch-up with family and some motivation to run, all for less than the price of a gym class.

Old fashioned? Perhaps. But it works.

Sadhbh Warren is an MX reader who would prefer Madonna if she put some pants on.

Email ThisBlogThis!Share to TwitterShare to FacebookShare to Pinterest
Labels: published

Very happy with this piece. Not only was it a great trip but this is the first time I have had a professional magazine team put pictures and formatting to my words and oh wow, does it make a difference. 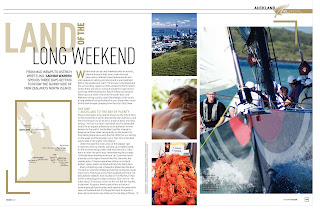 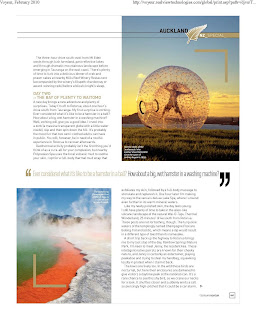 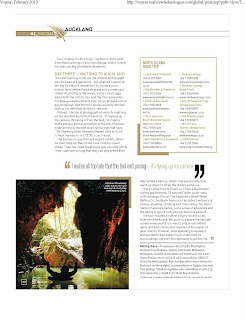 Published on The Punch - My thoughts on your travel pics.

Wondering how to take great holiday snaps? Ben Groundwater has tips from Richard I'Anson, professional photographer and author of Lonely Planet's Guide to Travel Photography, on how to take the perfect pic.

Except he’s forgotten the best tip on taking travel photos. Don’t. Put the camera down and go do something.

As Ben says, many travellers fancy themselves as photographers and “like to take the odd snap to show off to their friends back home”.

But it’s not the “odd snap”. It’s endless monotonous sunsets, sunrises, and blurred pics of the view from the train window, plane window and the local toilets. So many photos I wonder if they did anything on the trip other than press the shutter button.

There’s the scenery bore, usually a single traveller who takes endless shots of landscape and them standing in front of it, safe in the knowledge that their precious pictures are unsoiled by social interaction.

“This, this is a shot of a waterfall. And this is the same waterfall from a different spot. This is the waterfall with me in front of it. I always take two shots in case I close my eyes. No, I take three. Look, there I am. And here’s that waterfall again. Will you just look at all that water?”

Or the amnesiac bores who need to agree on the inconsequential details of what each shot is before they can move on.

And that’s not counting the technical bores who tells you all about the lens they used for each shot, the food bores who insists on photographing every meal and the ego bore who is gurning out at you from each of their photos. All four hundred of them.

Back in the days of camera that used film, the bores were usually limited by their budget. They didn’t take 20 shots of the same thing – it cost too much to develop. Travellers had a good look, took a pic and went off to have some fun.

But thanks to digital cameras, people feel unfettered in how often they click. I’ve been shown twenty photos of the same waterfall. I’ve sat through countless hours of the Taj Mahal, the Grand Canyon and Amsterdam’s red light district.

And it’s not just saving them for later, some people want you stop having fun and squint at that screen right now. One bore tried to show me pictures of the Whitsundays when we were still in the Whitsundays and trying to enjoy the scenery. I just said the screen was too hard to see.

But now Nikon have produced a camera with a projector, so bores can start show a slideshow on the spot. If I see someone coming towards me with that, I will be off and running before you can say “this, this is a picture of where we are right now”.

I’m not saying I won’t look at any photos, but I have a limit. Hand picked precious moments is one thing, the same shot from 16 angles is another. Much like your love life, I’m happy you enjoyed yourself, but I don’t to hear a complete play-by-play and flick through detailed pictures.

And, much like your love life, there comes a time to put the camera down and go have some fun yourself or people are going to think you’re a bit of a bore.
Posted by Sadhbh Warren at 10:19 AM 1 comment: