You may not know Chuck's name straight away but if you drink beer, there's a good chance his name is in your fridge right now.

I got to interview Chuck for his induction into the Beer and Brewer Hall of Fame (see their spring issue for 2011). I spent a thoroughly fascinating and slightly inebriating two hours talking beer and brewing with him in the Malt Shovel Brewery where Chuck insisted I try most if the beers (and gave me an excellent Mad Brewers Stout Noir to take home). We talked about swimming, marketing, James Squire and John Boston, and, of course, beer.

Why yes, sometimes I do get paid to write about drinking beer. You can commence hating me in three, two, one...

Email ThisBlogThis!Share to TwitterShare to FacebookShare to Pinterest
Labels: Beer and Brewer

Anyone who knows me can tell you, I love a good party. So writing this piece for Executive PA's April/May issue on ensuring your office bash goes with a bang was right up my alley. I got chase up advice from some of Australia's most experienced event organisers, including Ray Shaw, Managing Director of MCI Australia  and Australia's longest accredited meetings manager ("36 years and I still love it!"). Here are some of his tips to get the most from your night. 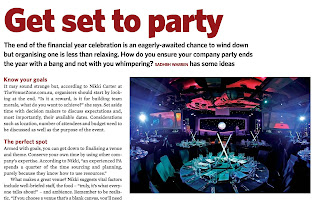 This is an exerpt only, for the full text, please contact me.
Posted by Sadhbh Warren at 5:13 PM No comments:

No, the *other* type of wet willy.

This was published in MX, Australia's free public transport daily, on 1 September.

The most amusing bit, for me, is that in Ireland the term "wet willy" means when someone dampens a finger and sticks it in your ear and wiggles it, to squick you out. Over here in Australia, it just means damp penis.

So. I have told MX's readership (three quarters of a million and counting) that a hairdresser stuck his penis in my ear. No, wait - BOTH ears.

I’m beginning to regret deciding to save cash by getting a haircut at a hairdressing college. I’m the only person there, and all the other students are merrily chopping away on mannequins.

A trainee starts swearing and frantically rubbing her doll’s head with a cloth – she has mixed up something wrong and it’s a good thing she’s not using a real person (things you never want to hear your hairdresser say: ‘‘Oh my God, her ears! They’re melting!’’).

So far, I’m not too worried. They tell me that they make sure the students are capable before they let them near real people. But the trick is to get the student with lots of training, and I don’t.

I get the middle-aged guy called Ray who has cut hair for 10 years untrained and has decided to formalise his qualifications. His enthusiasm is only spoiled by his inability to hold scissors steady. Ray takes a deep breath, and wanders around my head looking confused. My hair is lifted and combed and dropped and combed and squinted at.

Eventually he asks ‘‘What is your hairstyle?’’

I explain that I don’t have a hairstyle. I have hair and lots of it. A huge, flaming-red mane capable of swallowing whole paddle brushes for breakfast. I’m too lazy to straighten it, so it does what it likes, occasionally attacking people who get too close on trains.

I am steered to a basin and Ray gives me the head scrub of a lifetime. I am stunned by the various blows to the head and the fact Ray’s technique includes a double wet willy at the end to ensure he has got all the shampoo out of my ears.

Once my hair has been washed, it needs to be towel dried. Ray approaches this task with enthusiasm. Perhaps he likes drying hair. Perhaps he hates me. By the time he is finished, I amamazed to see any strands left on my head.

So is Ray. He begins to cut, and cut and cut some more. It’s all going fine until the head teacher walks by. He leans in to look and Ray jerks the scissors in surprise, taking off far more than he planned to. Then he has to trim, bringing it all to the same length.

Eventually he puts down the scissors and picks up the hair dryer. I can see by the way he is blow-drying that he is trying to give me volume. I don’t need volume. If my mane grows any larger, it’ll be capable of eating Tokyo. I tell him this. He sighs and puts away the roller brush.

Just a little? Please? He waggles a paddle brush at me.

And, semi-concussed and frightened that if I refuse I’ll get another wet willy, I give in. The mannequins reflected in the mirror watch, their mouths all open in silent screams. As I stumble out the door with what seems to be a beehive on my head, I think I know how they feel.

The girl at the desk asks if I’d like to try any other treatments from the students. They’re doing free waxing...
I didn’t know that I could move that fast – it must be my new aero-dynamic hairstyle.

Sadhbh Warren is an mX reader who is no longer dangerous to sit next to.
Posted by Sadhbh Warren at 1:11 PM No comments: